This text was written for the occasion of Andrew Gilbert’s exhibition The Battle of Blood River: 1838′ at Ten Haaf Projects, Amsterdam, 9 November – 21 December 2013.

It is from the blood and guts and excrement of history that the works of Andrew Gilbert emerge. He wanders the plains of unspeakable violence, the scorched earth of wars fought in the name of Emperor, Queen, God and country. He notes the dismembered masses and the faceless collateral in the march to civilization and enlightenment. He remembers what the custodians of history have conveniently forgotten, erased, rewrote, tweaked and misrepresented. His oeuvre is a fucked up History Painting. He creates diabolical dioramas for ethnographic and military museums that unfortunately can never exist.

His meticulous reconstructions have won considerable praise, and commissions to remember the shady past are numerous. He is steadily working through history, with a particular interest in the horrors (swept under the carpet for centuries) in the service of the British Colonial project. However, in his recent body of work, Gilbert turns his attention to a particularly bloody event with the English as mere observers, vultures hovering in the middle distance.

The narrative starts with the independent minded offspring of Dutch and French Huguenots, leaving the Cape in the mid 1830s and moving inland in South Africa to look for greener pastures – escaping the pernickety confines of British control, and in protest of the abolition of slavery. The Boer groups packed wagons with women and servants and set off on their quest to drive the natives living further north and inland into submission.

Gilbert focuses on the slaughter of approximately 3000 Zulu warriors by the Boers on the banks of the Ncome River, KwaZulu Natal, South Africa on 16 December 1838. An event remembered and rebranded as the ‘Battle of Blood River’ and ‘Day of the Covenant’ from 1868 onwards with the emergence of the nationalist white Afrikaner tribe.

As with most one-sided renditions of the past, the story of Blood River is pretty straight forward. I grew up in the area where it happened, and participated as a child and teenager in a couple of re-enactments and ritual invocations of the battle, so I can vouch for most of it.

I can recollect that before the battle a covenant with God was taken, binding the descendants of the Boers to remember the event in perpetuity, and to treat the day as a Sabbath. Apparently they also promised to build a house for God, but this is very possibly not true. I saw a picture of what they claim was built, but it looks really small and dingy, certainly not worthy of the Almighty God.

The Covenant was taken by blood thirsty men hungry for land, hell bent on avenging the murder of compatriots a couple of months earlier by the Zulu King Dingaan. The latter was also responsible for killing another group of 500 Boers invading his territory a couple of weeks later. Stories that include graphic descriptions of the killing of innocent white women, and babies bashed against wagon wheels have since been retold for generations.

In retaliation, battle lines were drawn, and the Boer wagons pulled into a laager formation, waiting patiently for ten thousand Zulu warriors to arrive with their short stabbing spears and traditional medicine to make them immune to death. 3000 Zulu men were killed with buckshot and canon balls that day, and drained of their blood in the Ncome River, turning it red.

A century later, in 1938, the Afrikaners erected a marble effigy on this site to celebrate the centenary of the slaughter. In 1972, the year I was born, they built a replica of the wagon laager out of tons of bronze. More recently a memorial has been erected for the anonymous Zulu Warriors that lost their lives.

I can remember being shown at school, around age 11, a black and white ‘documentary’ film of the event that confirmed that God indeed intervened to save the white men, and that it was a Holy miracle that no Boer were harmed. I remember attending two festivals on the Day of the Covenant at Blood River. The first memory is of baking in the summer sun inside a large white tent, listening to a never ending, excruciating sermon on how gracious God was on this day, and repeating the oath. The other time I remember vaguely that we were staying in green military tents, and it rained, and there was mud everywhere.

I tried to remember more, and googled ‘The Battle of Blood River’ and most of the references led me to White Supremacist websites and forums. I think I would rather rely on Andrew Gilbert’s versions of the event. His inventions are much closer to the truth. 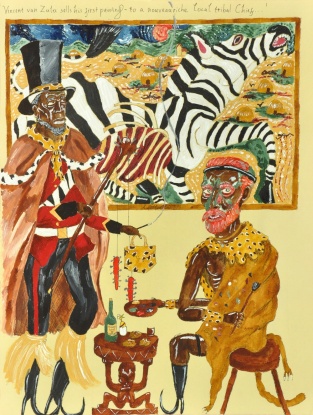 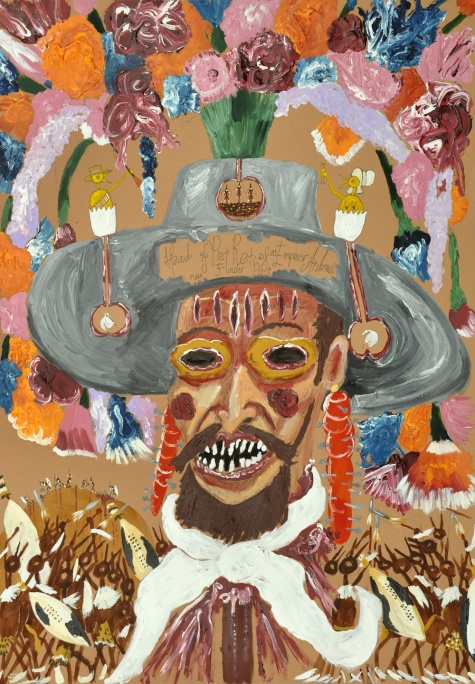